Coonawarra vignerons claim they occupy the best Cabernet Sauvignon terroir in the world, an assertion undisputed by the legions of fans of their intensely flavoured yet fresh and finely structured wines.

Talk of Coonawarra always comes back to the terra rossa, but the free-draining red earth laid over thick limestone is only part of the region’s success story. There are also good reserves of pure underground water, which vines can tap into through the terra rossa, and there is the long ripening season, with the warm days and cool nights of autumn working their magic on flavour development in the late-ripening Cabernet grape.

Coonawarra is a cool-moderate region influenced by ocean wines from the coast about 150km to the east and south. It is prone to frosts and various interventions are used to protect against them – sprinklers and frost fans among them.

Taking its name from the local Aboriginal word for a honeysuckle that grows wild in the area, Coonawarra is small wine region – the terra rossa is a cigar-shaped strip of just 20km long and 2km wide. The land being very flat, it is perhaps not the prettiest of wine regions, though the even terrain affords Coonawarra one advantaged enjoyed by few fine wine regions – a degree of mechanisation can be used without harming fruit premium fruit quality.

The wineries of Coonawarra and the charming town of Penola reward the traveller who makes the trek from Adelaide or Melbourne. 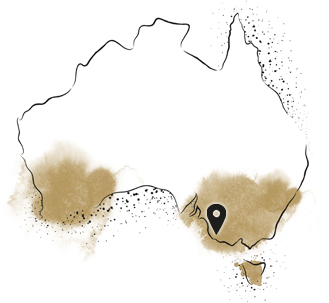