The textured, red calcerous clays, known as Cambrian Greenstone, are confined to an area around the Mount Camel Range and the most prized vineyards are planted in the shadow of its modest peaks.

The season is generally hot and dry and perfectly ripe fruit is the norm, though excessive heat is also the greatest potential hazard in Heathcote. Vineyards in the north of the region tend to be warmer and receive less average rainfall than vineyards in the south, which capture more of whatever breath of cool breeze makes it this far inland in summer.

Today Heathcote is an easy 90 minute drive north of Melbourne, but it was an arduous journey when enterprising miners and entrepreneurs descended on the area in search of gold in the 1850s. In Heathcote township, the heady days of the gold rush are remembered in several buildings dating from this era. 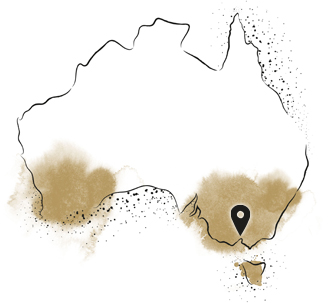