Tasmania is a true cool climate region with a reputation for ultra-premium Pinot Noir and sparkling wines. The island’s pristine environment and relative isolation establish its credentials as a clean and unspoiled haven suited to premium food and wine production.

The scale of wine production in Tasmania is small but growing and many well-known companies have increasing their holdings in recent years. The island is not divided into sub-regions, though there are distinct differences between wine growing areas.

In the north are the sheltered Tamar Valley and the hilly, wetter Pipers River area noted for fine sparkling and exceptionally aromatic Pinot Noir wines. The East Coast area takes in dry rolling hills overlooking pristine beaches and sprawling ocean bays, while in the south around the capital Hobart are Coal River and the Derwent and Huon valleys, which are sheltered by mountains to the west. Generally mild spring and summer temperatures followed by warm autumn days and cool nights produce a long season in which grapes ripen slowly, encouraging maximum flavour development. Lest one become complacent in such a paradise, Tasmania has its share of threats - frost, fungal disease, heavy rain and bushfire among them.

The island state is perfect for leisurely touring and its wilderness areas attract serious hikers and nature lovers. Many well-preserved historical sites provide a glimpse into the fascinating and often brutal world of a 19th Century colonial penal colony. 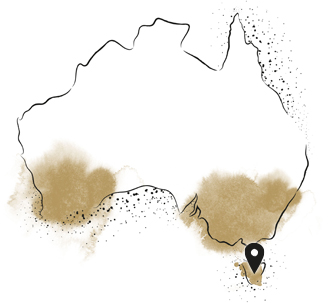