Victoria’s Pyrenees wine region is set among rugged hills in the central west of the state. It is known for premium Shiraz wines.

Vines were first planted after gold was discovered in 1854 but the modern wine industry dates from the 1960s. In the neighbouring Grampians wine region is Great Western, where you will find one of Australia’s oldest surviving vineyards and wineries. The wider area has a rich agricultural history in wool and grazing.

Summers days are hot but the nights are generally cool and autumns are reliably warm and dry, which make the region well suited to the late-ripening Shiraz grape. There is great variation in local conditions due to differing elevation, aspect and prevailing winds. Soils range grey-brown and brown loam to red sandstone and red clay quartz.

The Pyrenees region is noted for powerful but elegant Shiraz wines with great ageing potential. They typically have a note of peppery spice that is distinctive and sets the region apart from other hotter Shiraz regions.

A pleasant touring destination in itself, the Pyrenees is close to the more imposing Grampians Mountains (called Gariwerd in the local Aboriginal language), a year-round hiking and holiday centre. 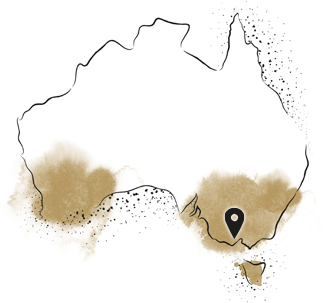