Central Valley is a large wine region stretching north to south on plains between the Andes Mountains and Chile’s Coastal Range. The mighty Andes exert a dominant influence over geographical and climatic conditions throughout Chile, but there are other influences too that combine to make Central Valley a vigneron’s dream.

Summers are warm, sunny and dry and snow melt from the Andes is an important water source. Relief from hot conditions comes with nightly cool air descending from the Andes and coastal breezes off the Humboldt Current, a regional ocean pattern that circulates chilly water from Antarctica up the west coast of South America. Such benign conditions inhibit many common vine diseases and Chile is also free of phylloxera; hence, many vineyards are grown on own roots, though the use of rootstocks is increasing.

Hot, sunny days, cool nights and a long, dry season make Central Valley well-suited to the late-ripening Cabernet Sauvignon grape and its lesser-known Bordeaux cousin, Carmenere. There are significant plantings of Pais, Merlot, Malbec and Shiraz, and as new vineyards creep up the slopes of the Andes and the Coastal Range, cooler climate varieties are also being planted.

This is Chile’s largest wine region and there is great variation in soils and local conditions. It is divided into increasingly important sub-regions.

Sandwiched between the Andes and the Pacific Ocean at the northern end of Central Valley is the national capital, Santiago, where it is boasted that you can snow ski in the morning and sunbake on the beach in the afternoon. 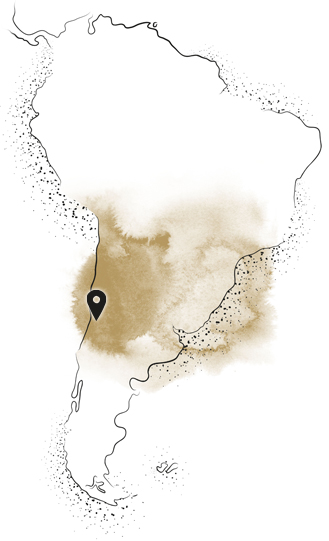