At 45° South Central Otago is the world’s southernmost wine region. The vineyards are also the highest in New Zealand, located around 300 - 400 metres above sea level among spectacular alpine scenery rising to over 3700m.

Although small, Central Otago is a rapidly developing wine region with a swiftly growing international reputation for great Pinot noir wines. More than 70% of the vineyard area in Central Otago is dedicated to Pinot Noir, with smaller plantings of Chardonnay, Pinot Gris and Riesling.

Vignerons claim Central Otago has many similarities with Burgundy, the French home of Pinot Noir. The climate is continental, with cold winters and hot, short summers with cool nights that help preserve fresh fruit flavours and acidity in Pinot Noir fruit. Frost is a major threat but disease pressure tends to be low. Soils are free-draining loess and gravel over schist with low organic matter.

The region is noted for great variation in sub-regions and vineyard sites and mesoclimates are heavily affected by the mountainous terrain.

Like many wine regions in Australia and New Zealand the lure of gold brought the first Europeans and, although vines were first planted in the late 19th Century, a viable wine industry did not emerge until the 1980s.

A tourism destination in its own right thanks to the dramatic scenery and first-rate wine and food culture, Central Otago is close to Queenstown, a major adventure tourism centre with excellent ski fields. 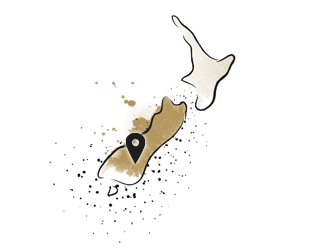