The Medoc is a celebrated wine appellation in the Bordeaux region of south-west France. Some of the most illustrious names in wine are found along this strip of land on the left bank of the Gironde estuary just north of the city of Bordeaux.

The region is famous for its grand chateaux and the vast fortunes that have been won and lost to the vagaries of weather, agricultural pests, wine fashions and market speculation over the past 200 years.

Cabernet Sauvignon is the main grape, followed by Merlot, Cabernet Franc and Petit Verdot and Medoc wines are Cabernet-dominant blends of these. The finest are renowned for their longevity.

The best vineyards are planted on well-drained sandy gravels in the southern Medoc, while in the north, closer to where the Gironde drains into the Atlantic, the soils are heavier clays. Temperature extremes are moderated by the Atlantic Ocean and the body of the estuary, which reduces but does not remove the risk of spring frost. Other viticultural risks include excessive rain, hail, fungal diseases associated with high humidity, and cool seasons in which optimal ripeness cannot be achieved, though with climate change and better vineyard management the latter is becoming rarer.

The Medoc is popular with wine tourists and the city of Bordeaux hosts the biennial Vinexpo, the world's largest and most prestigious wine trade fair. The vibrant city is famed for its ancient history and well-preserved historical buildings. It has many fine history and art museums. 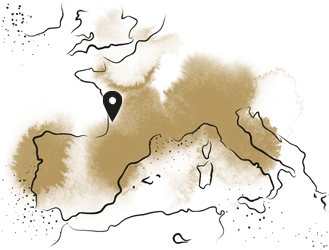